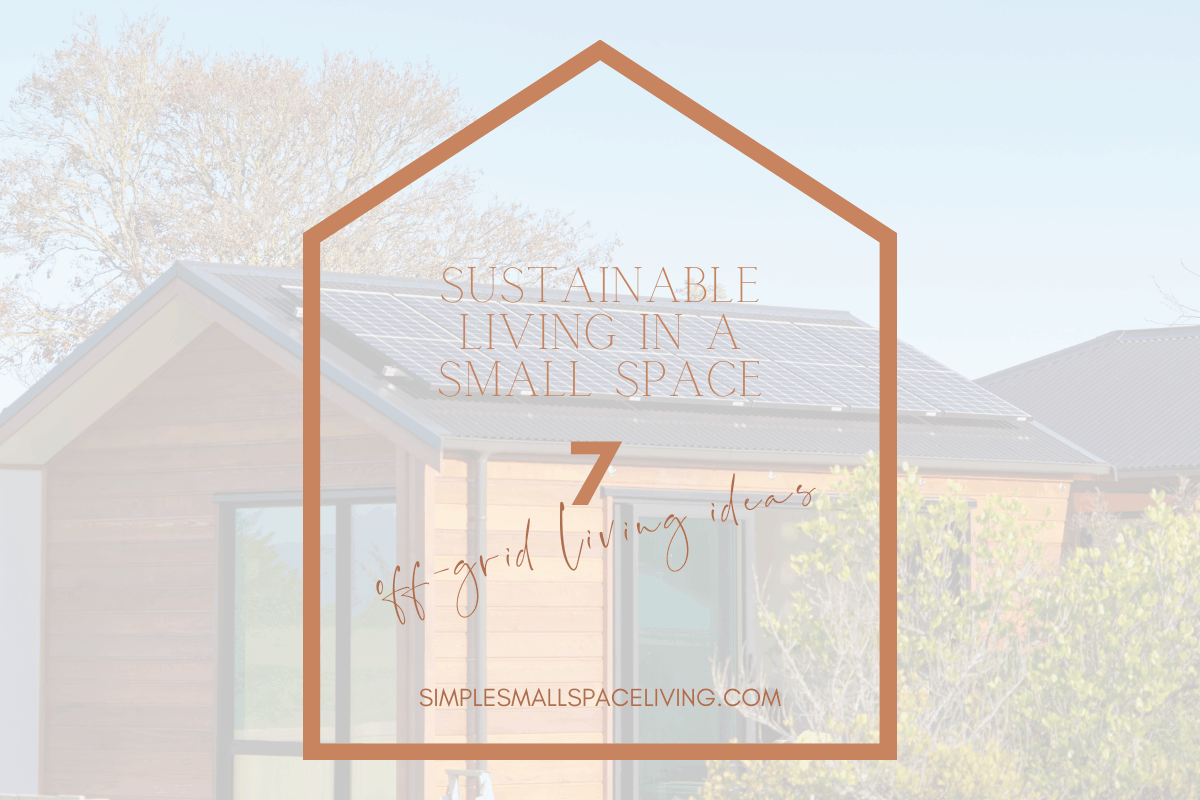 Living in a tiny home, small space micro dwelling or van/RV may give people the idea that you are automatically living off-grid.  As if because your living space is so small, you don’t use electricity or water or sewage.  Maybe it’s because they can’t fathom how you live in a small space.  But I’m here to dispel the rumour: not all compact living spaces are completely off-grid.  We may be self-contained, but we also may need to plug in for power or dump sewage.

Living in a small space does have a positive impact on the environment.  For a more in-depth look at how, be sure to read my article, “6 Small Space Eco-Friendly house ideas for big environmental impact”.  In this article, I will show you seven off-grid living ideas that you can implement to make your small space more sustainable.

Off-grid with a garden

The first (and easiest) off-grid living idea is to start a vegetable garden.  There’s a misconception that you need a plot of land to create a huge farm-like garden.  You could simply start with some fresh herbs on your windowsill.  Or a couple of pots with lettuce or strawberries on your balcony.   Once you start harvesting fresh fruits and vegetables, I’m willing to bet you’ll catch the bug and won’t look back.

In sunnier climates, solar panels on houses are mainstream.  There are some countries that will provide subsidy for adding them to your house.  In certain locations, you can even sell your excess back to the grid!  Imagine, making money off your roof for just being … your roof!  But solar as an off grid living idea doesn’t stop there.  Portable solar panels can be hooked up as a power solution for nomadic dwellers as well.  You can get cell phone chargers or fairy lights and lanterns that are solar powered.  You can set up lights in your yard that are solar powered as well.  If you live in the right climate, solar is one off-grid living idea that I would not think twice about.  Harvest the sun and reap the rewards.

Similar to solar, using wind as an off-grid living idea, in the right climate, is a no-brainer.  In 2018 it was the second greatest source of renewable energy, producing 5% of global electricity.  Certain parts of the world have wind farms, where large turbines harness the wind into energy.  While driving through Western Australia, I was impressed to see farm after farm with windmills.  On smaller scales, such as the farms I drove past, the humble windmill could be simply used to power a water pump.  In contrast, it can be used to power complete towns.  If you are interested in harvesting wind power as an off-grid living idea, keep in mind that you do need to live on a larger plot of land for optimal conditions.  Tiny house, big land, wind turbine?  Sounds like a plan to me!

When you think about living off the grid, you may liken it to being in a power outage.  Many people would automatically assume that by going off-grid, you would have a generator for electricity, but that is not the case.  Generators are loud, large and require gas, propane or natural gas to power them.  With new technology, generators are quickly becoming an outdated appliance.  The new kid on the off-grid living idea block is a power station.  These devices can range in size; they can be small enough to put in your pocket and charge your phone; or can be large enough to power your house.  The beauty of these are they are typically portable (sizes vary), quiet, and renewable.  Many have a solar option either built in or panels that can be hooked up to recharge them.  Alternatively, they can be plugged into a standard wall plug, or even to a 12v plug while you drive!

What are some examples of off-grid power stations?

Companies like Goal Zero and Jackery are at the forefront of these devices and are providing off-grid living ideas and opportunities to those who previously did not think it possible.

“Rain, rain go away, come back another day” will no longer be sung once you start collecting rainwater as our fifth off-grid living idea.  Wait what?  Yup, you heard right, collecting rainwater.  Rainwater is free water.   It can be used to water your garden, wash your car, flush your toilets, and do your laundry.  You can shower with rainwater and, depending on the filtration system you set up, you can even potentially drink it.  If that’s not off-grid living, I don’t know what is!

I didn’t know much about greywater before living in my van.  Scratch that.  I knew nothing about greywater before living in my van. I’d never heard of it.  It’s basically your sink water.   Depending on how you live, it could be as clean as just the water you wash your dishes with, or it could be pretty hectic.  For those of us living in small spaces (like vans), we tend to keep our greywater pretty clean to minimize smells wafting through said small space.

What can I use it for?

If your greywater is on the clean size, you can recycle this water to use in the garden.  You could have it drain into a jug under the sink and use it directly form the jug, or you could go a step further and divert it through to an irrigation system outdoors.  It can be as simple or complex as you are wanting to set up.  Keep in mind however, that untreated grey water must not be used for anything that would come into contact with humans, such as fruit or vegetable gardens or for sprinklers.

My final off-grid living idea which may seem highly controversial for a home is a composting toilet.  I’m sure you’re also thinking, most of this list is controversial!  But hear me out.  A composting toilet requires little to no electricity (depending on your model) and requires no running water.  It does, however, require access to a sewage line to dump your liquids every 4-5 days (depending on usage).

How does it work?

If you’re not familiar with this off-grid living idea, a composting toilet is separated into two sections:  solids and liquids.  The liquids are diverted into a jug, which, as I mentioned, you simply empty into a sewage line whenever it’s full.  I have a composting toilet in my van, and ironically, I find a public washroom to dump my liquids into … so I need a toilet to clean my toilet.  The solids go into a compartment that is filled with an organic material which aids in the composting of the waste.  You can use anything from peat moss to coconut coir as your base for this.  Some people are naturalists and don’t put toilet paper in, as it fills up the compartment faster.  I do, I would rather change it sooner than deal with dirty toilet paper every day.

It’s simple enough to clean the solids – just putting a garbage bag over it, dumping it out and putting it in the trash.  You then just refill your organic material and you’re done.  The whole thing takes about 10 minutes and you only really need to do it about once a month, again, depending on usage.  Sciency fact:  when solids and liquids combine (#1 and #2s that is), that is where the odour comes from.  By having them separated, and the solids mixed with the organic materials, you don’t have any odours from the composting toilet.

Off-grid living ideas don’t seem so far-fetched when you break them down.  I bet there are at least one or two ideas on this list that would be manageable to implement into your everyday life.  Having a compact living lifestyle reduces your environmental footprint by requiring fewer materials to build, utilising smaller appliances and less energy consumption, and producing less carbon dioxide emissions.  I would like to challenge you to implement some of these off-grid living ideas and would love to know which ones you think would work best in your small space.

Are you following along on Pinterest?  Make sure to head over to our page and have a peek around.  It’s full of ideas and inspiration for clever storage, multipurpose furniture and organization hacks for your small space.

Love this article?  Be sure to Pin it for a re-read when you need a hit of inspo for some off-grid living ideas.

This site uses Akismet to reduce spam. Learn how your comment data is processed. 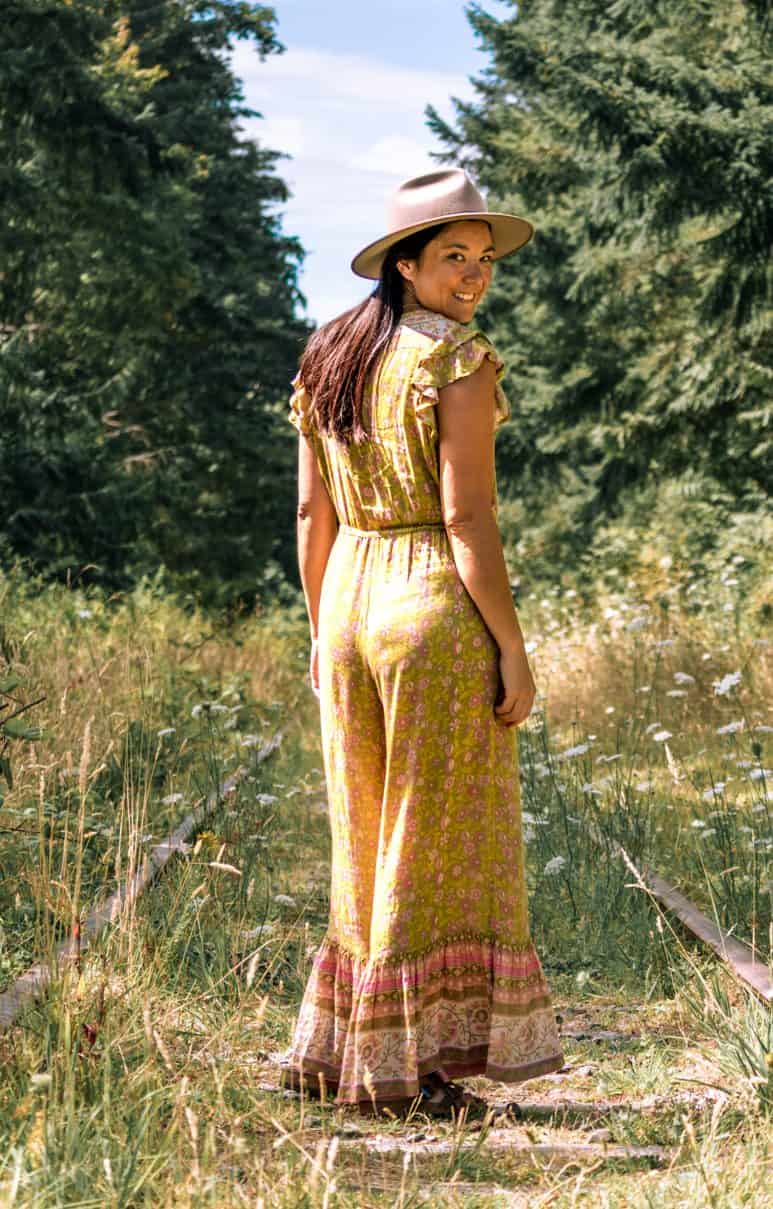 I believe that living in a small space leaves room to live more of a life that matters to you.  To not be bogged down with space that needs cleaning and is full of possessions that aren’t meaningful to your story.  I will show you small space ideas to get you organized and make you fall in love with the cozy space you are lucky enough to call home sweet home.

I’m a former event planner turned blogger, living full time in my newly converted campervan, sharing all my favourite hacks and small space living ideas with people just like you!